Ms Pigram expressed high praise for the Company’s site team; and in particular praised the fact that the project had been completed one month ahead of schedule. 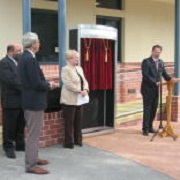